A two-legged robot that walks at record-breaking speed has been developed by researchers from Germany and Scotland.

The robot is controlled by a simple program that mimics the way neurons control reflexes in humans and other animals. Unlike most other two-legged robots, RunBot has few sensors and can detect just two things – when a foot touches the ground, and when a leg swings forward.

Sony AIBO Europe – Official Website – AIBO News
[…]
Following the Sony Corporation FY05 3Q announcement, the production of AIBO Entertainment Robots will be discontinued as of end March 2006. As for the sales activity, we will discontinue the sales of AIBO once all remaining stock runs out.
[…]

Akihabara News – The Enon robot at the service of AEON customers

Akihabara News: “RoBoCup 2005 : the pictures and the video!” 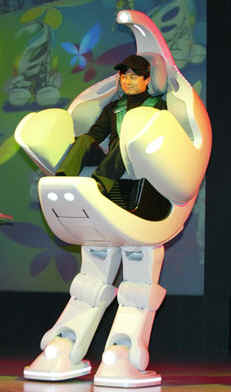 We developed the exo-skeleton type power assist system to realize the walking aid for the gait disorder person.

At the present time, HAL-3 is state of the art power assist system in the world.

Some sensors such as angle sensors, myoelectrical sensors, floor sensors etc. are adopted in order to obtain the condition of the HAL and the operator.

All of the motordrivers, measurement system, computer, wireless LAN, and power supply are built in the backpack.

Using the battery attached on the waist, HAL works as the complete wearable system. 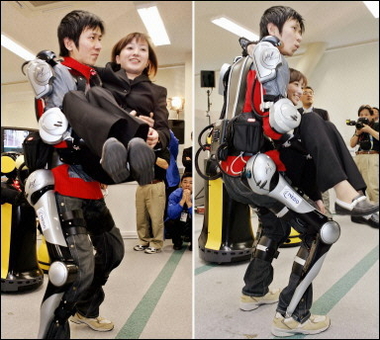 TOKYO (AFP) – Japan has taken a step into the science-fiction world with the release of a ‘robot suit’ that can help workers lift heavy loads or assist people with disabilities climb stairs.

‘Humans may be able to mutate into supermen in the near future,’ said Yoshiyuki Sankai, professor and engineer at Tsukuba University who led the project.

The 15-kilogram (33-pound) battery-powered suit, code-named HAL-5, detects muscle movements through electrical-signal flows on the skin surface and then amplifies them.

It can also move on its own accord, enabling it to help elderly or handicapped people walk, developers said.

The prototype suit will be displayed at the World Exposition that is currently taking place in Aichi prefecture, central Japan.